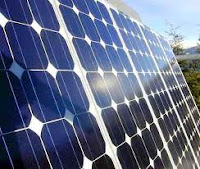 Photo Voltaic solar panels that were installed on the roof of are now providing 50Kw of green electricity on the Civic Centre.  The Council invested £110k and expects to get a 6 year payback on the investment. This is something I helped instigate when I was Cabinet Member for Central Services and I fully support this type of initiative because its green and makes financial sense. The Council is receiving a subsidy from Central government which is linked to RPI and also based on current electricity costs.  It is highly likely that electricity will double in the next 10 years.  Currently Arun has reserves of about £9 million which in the current environment is only receiving an interest return of about 2.5%, with this investment the council will receive a return of about 18% or more, it’s a very good deal for local tax payers and a good example of green leadership.  I hope we can install panels on Social Housing as well.
Posted by Unknown at 18:56 No comments:


The work on the new Arundel Museum building and public toilets has started after the delays caused by archaeological digging and the finding of a 17th century Calvert.  The Mill road toilets were due to close next March (2013) , but this has been delayed to allow for the the new building to be completed

The Angmering Park estate and the Arundel estate have been very supportive and have kindly donated the land. Arun has given a grant of £300k  towards the new building on the site of St Nicholas Hall which was recently demolished;  In addition another £85k was provided towards the provision of new toilets to replace the existing ones in Mill Road.
The Trustee's of the Arundel Museum fund raised the balance of funds and the Heritage Lottery Fund (HLF) gave a grant of £888k towards the building allowing for the project to start in  2012 and finish some time in the first half of 2013.   This is something I have steadfastly been supporting for the last 7 years and I am fully behind all the Trustee's in all their efforts
Posted by Unknown at 18:42 No comments: