The budget statement is due on the 3rd of December and I am writing this article in early November.

This statement will be important to Arundel in two aspects, firstly and very importantly we should hear regarding investment for flood defences.  The LTRAS Phase 1, Part 1 scheme (Lower Tidal River Arun Strategy) is to repair and future proof Arundel’s flood defences, this scheme will cost approximately £600k,

The Government has not yet agreed the scheme, and its progress will depend on the content of the Chancellor’s Autumn Statement on 3 December.  The investment is firmly supported by the Environment Agency, West Sussex County Council, Arun District and Arundel Town Council, we do not yet have a formal commitment from Arun, but I know from discussions with officers that this should not be an issue.

The Environment Agency is expected to commit £280k; the balance of  £320k has so far been underwritten/guaranteed by WSCC in order to get the proposal onto the list of approved schemes.  In support of this, Arundel Town Council has already guaranteed (and made arrangements to put aside) £64k (two tenths), formal agreement will follow from Arun once we get the Chancellors commitment, this all bodes well for Arundel’s flood defences.

The second announcement will be about the A27 and could include a commitment on money for an Arundel Bypass, As you know I am in favour of the Pink Blue route or Option A, But this if it is confirmed will be the first step in a very long journey.

If the Chancellor does put the money aside (and it’s a big if), then it is expected that any scheme will be subject to a full public enquiry, an Environmental Impact assessment, where issues like the design (which be of the highest level), environmental mitigation, (tree planting etc) and sustainable transport mitigation will all be discussed and fed in to the process.

We need a new Cycle way running parallel to Ford Road to Ford Station and we need a new free car park at Ford where there is space on the south side and already a hardcore area for maintenance.  The new cycle way from Arundel Station (under the railway and coming out by the bus stop should be completed some time this winter.

We also need the Arundel Chord, which is a rail link that will allow trains to travel down the Arun Valley line and turn left to go east to Brighton

All this will balance impact of a by-pass, when we now see the Newbury Bypass, I wonder why there was so much fuss 20 years ago, If the Bypass does get the go ahead then I think in 20 years we may  see this in a similar way.

Paul Dendle is the Arundel Ward & Cabinet member on Arun District Council, his email address is pauldendle@aol.com
Posted by Paul Dendle at 15:42 No comments:

WSCC Press release - A27 campaigners take their fight to Westminster

A27 campaigners take their fight to Westminster

The A27 Action campaign was taken to Westminster last night when leading campaigners met with the Transport Minister.

West Sussex County Council’s Leader Louise Goldsmith, Arundel and South Downs MP Nick Herbert, East Worthing and Shoreham MP Tim Loughton and Worthing West MP Peter Bottomley all made the case for improvements to the A27 when they met with Patrick McCloughlin on Tuesday evening.

The meeting comes just weeks before an official announcement is expected from government about what roads will receive funding for improvements.

Prime Minister David Cameron gave his largest hint to date that the A27 would be part of a £15billion package of road improvements earlier this month. Written material accompanying his speech to the Confederation of British Industry’s annual conference mentioned the A27 would be included as part of a nationwide initiative.

West Sussex County Council has spearheaded a campaign for improvements to the congested trunk road with support from local MPs, businesses and district and borough councils.

Louise said “It was a good meeting with the Minister. We’re coming ever closer to the time when the government will make its decision and we will continue to make our case for the A27 to be on that list right up until that announcement.

“Our A27 Action Campaign has brought together so many people, MPs, local county, district, town and parish councillors as well as businesses, small and large, and residents. It has been terrific to have such support from so many sectors of our community.”

The announcement is expected in early December.
Posted by Paul Dendle at 12:49 No comments:

As residents will be aware I was involved in a meeting of the Arundel Youth Club, West Sussex County Council, The Learning Tree nursery and Arundel Town Council last July to try and broker an agreement to allow parties to co-habitat within the existing building.

There were a number of issues regarding safe-guarding for children and sharing space, it was one of most difficult meetings I have ever attended in either public life or my professional life, but an agreement of sorts was agreed in the last minutes of the meeting

Since then I have withdrawn from the discussions, but I have encouraged the Town Council to negotiate a possible deal to allow the Youth club to vacate the existing premises and receive a substantial settlement.

Michael Tu the The Town Mayor and the Town Council has worked tirelessly to negotiate a final settlement deal where the Youth Club would receive £20,000 to give up the lease and this took into account an outstanding utility bill of £8k and a substantial dilapidation settlement, but also included is outstanding rent from the Nursery which WSCC were holding.

As Arundel Ward member on Arun District Council I have no overall responsibility for Youth services or Nursery education, but as a local Councillor I think I have a legitimate right to give an opinion and criticise when I see an issue that fundamentally affects my constituents, particularly when it affects parents careers and children’s education

I believe the deal that has been negotiated on behalf of the Youth Club is a good deal and gives a route to guarantee youth services within Arundel, also I believe that this deal allows the Learning Tree to continue in the building and expand as there is a waiting list.

It has been reported to me that the Youth Club Trustee's have decided to decline the deal that has been negotiated for them and in fact extend the existing lease that ends in March 2015.

I believe this is the wrong decision, I believe for the Trustee's to make this decision defies logic, it puts the Trustee's in to a dubious legal position with a risk of up to £500k personal liability to Trustee's as well as forcing the Learning Tree to find a new premises as they can not continue sharing the facility with the Youth Club.

The resulting chaos will be detrimental to Parents and children at the Learning Tree and also does not serve the Youth club members and I believe this is wrong and all the Trustee's should reconsider their position and reverse this decision.

I would urge them to meet as soon as possible to consider the legal ramifications to their personal circumstances as well as the detrimental effect to Youth Club members and users of the Learning Tree facilities.

letter from our MP Nick Herbert regarding the Arundel By-Pass 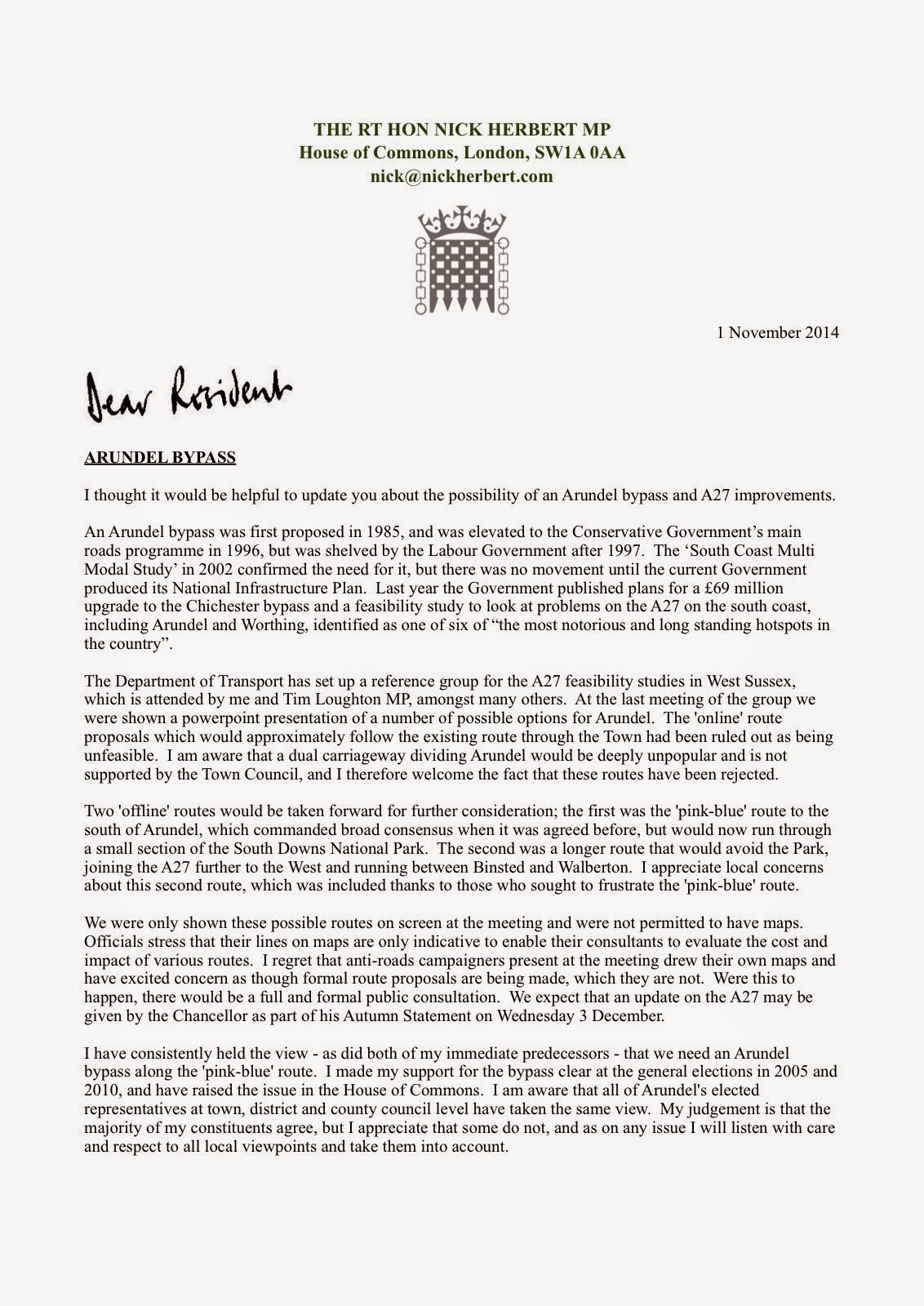 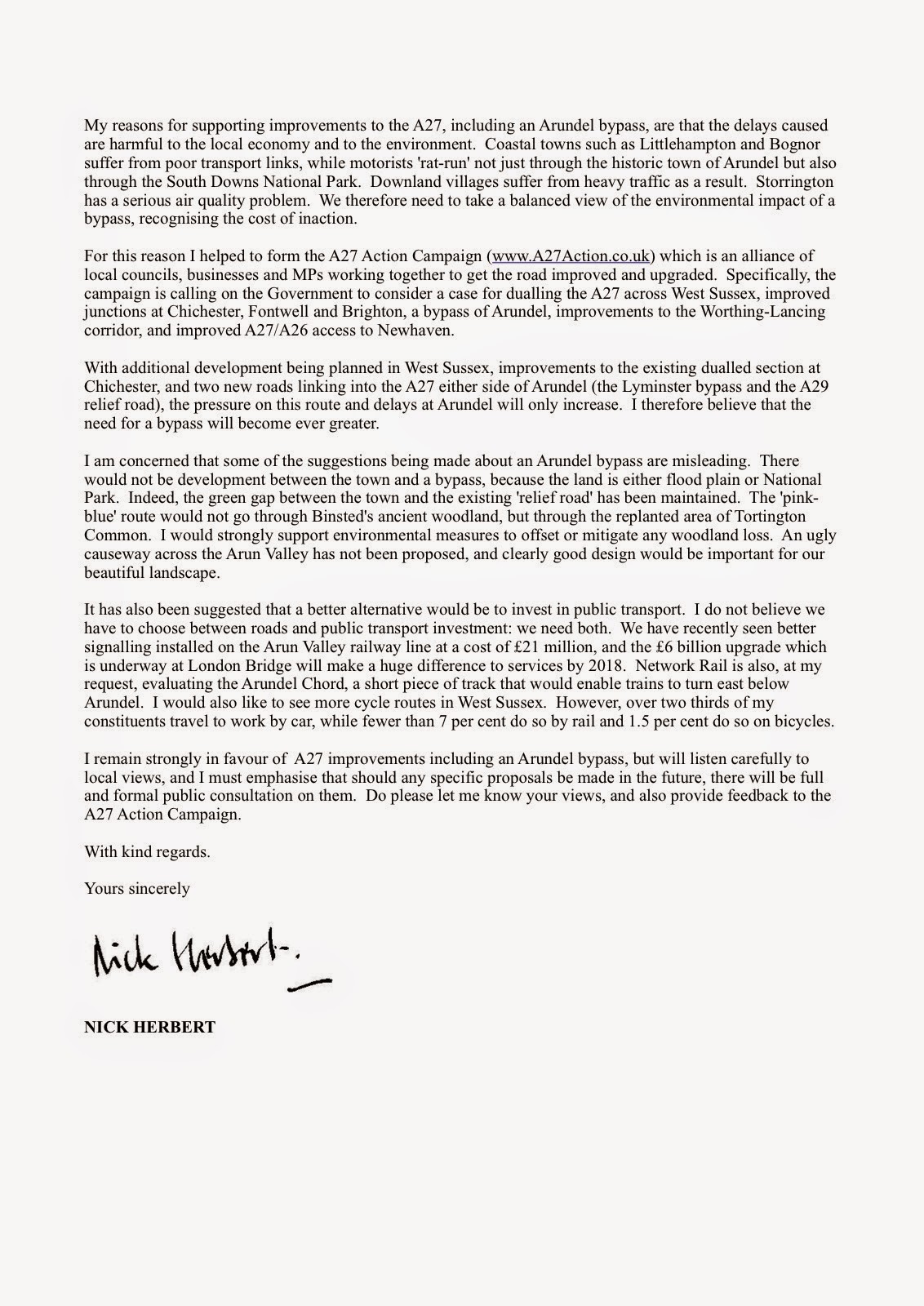