Option One an online solution a dual carriageway through the middle of Arundel has only one good thing going for it and that is cost, on every other measure it’s a disaster for Arundel

The negatives are that it splits the town, it will cause a huge amount of disruption in it’s construction, it will bring traffic close to homes, it will have roads entering directly onto a dual carriageway and we have a huge foot bridge over Ford Roundabout.

But what is WSCC up to, buried in all the consultation documents was the following  on page 13, para 1.3.3, it says that Option 1 “incorporates the route suggested by WSCC”

This is the same WSCC who have always supported the Pink Blue route, but suddenly and clandestinely changed their policy without public debate, the same WSCC who said.  ”We at WSCC are taking a neutral position on the options pending more details becoming available”

So not quite so neutral as they postured and again WSCC  have meddled in the A27 Bypass, firstly at Chichester and now in Arundel,  Its not for WSCC to tell or suggest what Arundel needs, they need to follow their own words.I have asked for a Freedom of Information request to WSCC and the Highways agency, I will have the information by October.

Also I have heard from sources that the South Downs National will lay down in the road rather than let option 3 go ahead though the National park and “Ancient woodland”.  This is the same ancient woodland that has been cultivated every few years and is currently planted with conifers.  It seems the SDNP could live with 5a.

When the SDNP was set up, the original intention was to have the boundary as the A27, only after lobbying from campaigners was the park boundary pushed south of the A27 to cover the proposed Pink Blue route, the same place where make campaigners have been buying small plots of land to frustrate any Pink Blue (Option 3).

I support Option 3, I can not support option One, I don’t believe the SDNPA should have a veto on option 3, but I want an offline bypass, many people I have spoken to seem to want option 5a, this would not I believe be the best option, but the data from the documents seems to be pushing the argument in this direction.

There is an Arundel parish meeting been called by Arundel mayor Angela Standing at St Nicholas Church on the 25th of September at 7pm to discuss the Bypass options. I would advise arriving early

Beware of this leaflet

Beware of the following leaflet, it's not an official leaflet from Arundel Town Council or Highways Agency, The town meeting takes place on the 25th of September, this is an attempt to hoodwink you by Anti Road groups, yes they have put at the bottom who it's printed by, but they could have made that clear in the headlines 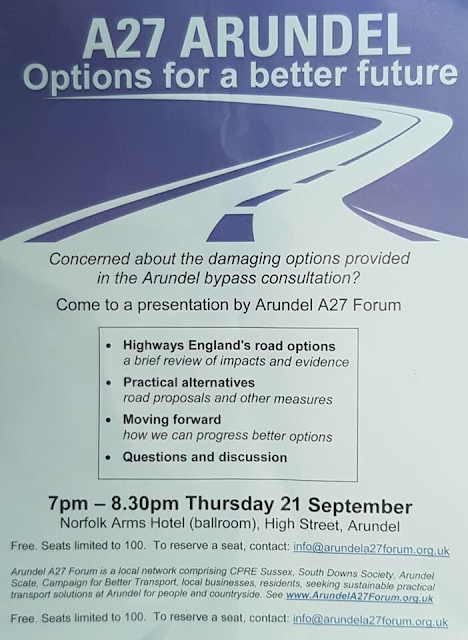